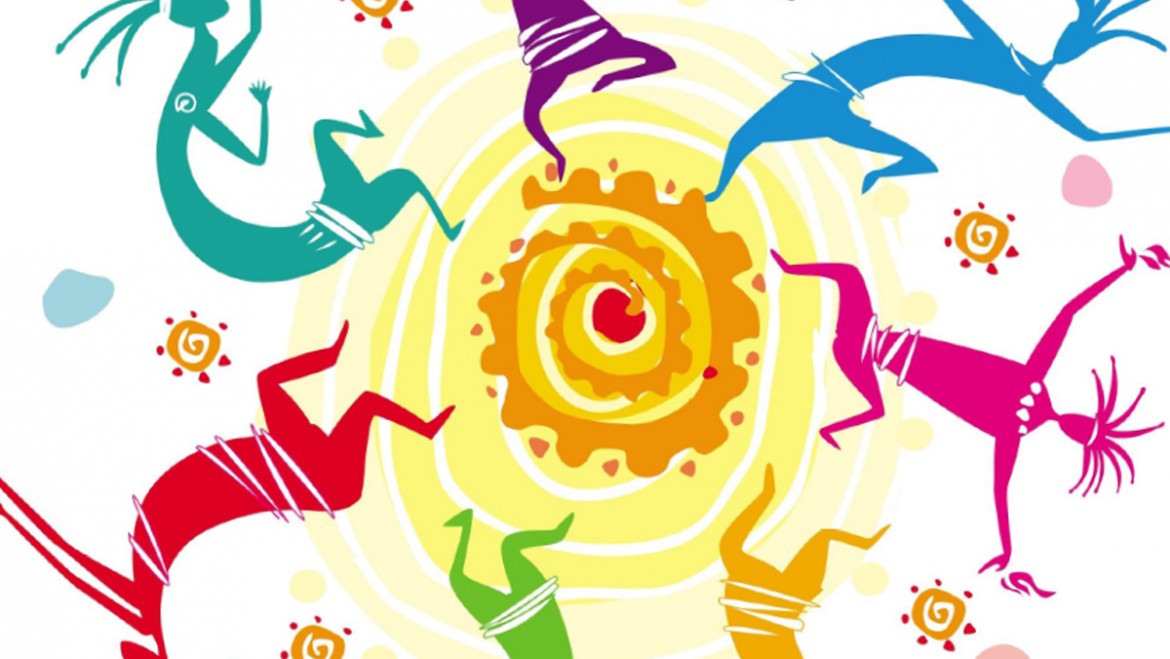 Biodanza is a human integration system of organic renewal, of affective re-education, and of re-learning of the life original functions. Its application consists in leading vivencias through music, singing, movements and group encounter situations.

The Biodanza integration process is carried out through the stimulation of primordial functions connected to life that allows every single person to be integrated with himself, with species and universe.

It’s the practice that aims to the organic self-regulation, mainly made by special conditions of trance. They activate cells reparation and global regulation of biological function processes, reducing stress and disorganization factors.

It’s the ability to set relationships with other people.

Learn to live starting from the instincts. The instinct is a inborn hereditary behavior, that doesn’t need to be learnt and it shows itself through specific stimuli whose aim is to preserve life and allow its evolution. Instincts represent nature in ourselves and being sensitive to them means to set a contact between nature and culture.

It’s an experience led with a great intensity in terms of here and now and with ontological quality (it is projected on the whole existence). Vivencias in Biodanza are integrative because they have a harmonizing effect. Vivencias in Biodanza is addressed to stimuli of vitality, sexuality, creativity, affectivity and transcendence potentials, which are called lines of Vivencia.

The Seven Powers of Biodanza

The pedagogical and therapeutic success of Biodanza is given by its effects on the organism as a whole and by its existential rehabilitation powers, that are:

Each one has a transformer effect and if linked each other, following a scientific theoretical model, they constitute eco-factors with extraordinary effects, able to influence on genetic programming lines.

1. The power of music

In Occident Orfeo has inaugurated the musical power from the mythological point of view. Through the integrating music Apollo was able to influence the nature laws and the mysterious models that influence our life. Thanks to the music Orfeo could make trees to blossom in winter and calm down ferocious animals.

The musical power is known in Japan, China and other oriental countries, moreover lot’s of anthropologists know that this power is used by shamans, Tibetan monks and Sufi dancers which aim is to call the recovery forces and the cosmic bond.

Now the scientific research in musical therapy and in music psychology confirms the efficacy of the musical power. Quoting Alfred Tomatis, Don Campbell, Yehudi Menuhim and Michel Imberty we understand that the music is not only linked to the perceptive areas of sensibility and innovation, but it also has a power on plants, animals and human beings.

Alfred Tomatis teaches us To listen to the Universe” to open the perception in all the directions and it re-establishes the essential bonds with the surrounding environment and with people. Don Campbell discovered some specific effects of Mozart’s compositions, able to stimulate cognitive and perceptive functions: the “Mozart effect” from which it can be found the “Vivaldi, Bach and Debussy effect”. Yehudi Menuhim studied the relations between music and neurosciences, trying the music effects on neurophysiologic functions and on the attitudes of children.

Michel Imberty is one of the most important specialists of musical semantics. He did analysis of different musical themes and their emotional meanings. The research about musical semantics has been done also by Gundlach (1935), Hevner (1936), Campbell (1942) and Watson (1942). Many other recent researchers have tried the effect of music on living being.

In Biodanza the music is selected to stimulate the eco-factors linked to the five lines of vivencia.

2. The power of integrating dance

Biodanza has about 250 exercises and dances which purpose is to activate human movements in an harmonic and integrative way; dissociative movements in Biodanza don’t exist. We have several integration motor and sensory exercises and affective motor ones, and many of coenaesthetic sensibility; another series of exercises is composed by simple dances that stimulate the vivencias of vitality, sexuality, creativity, affectivity and transcendence.

During the Biodanza session music becomes a physical movement and the dancer get into the vivencia. The combination music movement-vivencia provokes subtle changes in many systems: limbic-hypothalamic, nervous-vegetative, immune, neurotransmitters.

These dances are powerful eco-factors for the vivencial induction, they mutually get stronger and they have important effects on homeostasis of organic functions, on the regulation of the integrative- adaptive- limbic-hypothalamic systems, and on the elevation of life quality and joy of living.

3. The power of vivencial methodology The Biodanza methodology is oriented toward the induction of integrative vivencias able to exceed the dissociations induced by our cultures. Currently many people live in psychosomatic dissociation conditions. They think something, but they fell something else, so they act in a dissociative way as regards what they feel.

The unity of our existence is always crisis. Through the vivencias we can improve the nervous-physiological and existential unity of human beings. The vivencia is the intense feeling of being alive here and now and it has several coenaesthetic and emotional characteristics. Vivencias have many different emotional nuances as euphoria, erotism, tenderness, interior peace. This helps to express the authenticity of identity.

Vivencia is different from the emotion. Emotion is an answer to external stimuli and it vanish when they disappear. Vivencia is an experience that touches the entire existence. It has deep and long effects because it makes the organism to participate in its totality and it induces the feeling of being alive, transcending the ego. It is an experience here and now.

The vivencias allow us to be ourselves, it constitutes a new epistemology. Our intense instinctive and affective motivations are inhibited because of our cultural models. The deep vivencias that compromise unity of our psychism are the original forces of life.

A rational approach to our conflicts doesn’t solve our dissociative troubles and being conscious of our conflicts doesn’t modify our attitudes. The thing that helps us to have a healthy and integrated. For this reason we don’t make an analysis of conflicts, but we stimulate the health part of our identity through intense vivencias. “Instant is the only place we can live in”.

Biodanza is an integration system of human potential. Integration means coordination of activities of different subsystems to join the harmonious functioning of a larger system. The vivencia is the essential integration agent of the functional unity: “we live here and now, in a cosmic time”.

4. The power of caress

“Biodanza is a poetics of human meeting”

The connection between people is essential in each act of rehabilitation, it doesn’t exist the growth in solitude (the mystical and therapeutic techniques in solo are fallacious). The contact with other people is what allows the growth.

The verbal connection is not enough. It’s necessary the contact, the dance in couple or collective and the corporeal enthusiasm in a sensitive and slight contest, with a feed-back. Currently there are many scientific researches about therapeutic and pedagogic effects of caress. A lot of authors discovered that the contact enhances and gives affective containment to people. Obviously the contact is not sufficient, it is necessary the existence of a connection, that means every kind of physical bound created by a sincere affective force.

Caress is not only contact, but also a connection. Therapies that don’t have the corporeal engagement are dissociative, because they work only on a conscious level and not in important vivencias of love and communion.

The affectivity includes: the connection, the participation, the “we” of Martin Buber.

5. The power of trance

The trance is an modified state of consciousness that implies the decrease of ego and the receding to the primordial, in a certain way to the perinatal steps. It concerns the phenomenom of receding to the initial steps of existence.

The trance effects are a biological renovation because in this specific condition the original biological characteristics are reissued (intense metabolism) and the first need of protection, nutrition and contact.

For this reason the exercises of trance allow the rebirth in a contest of love and care. Many adults bring with them a injured child, without love. This exercises help the treatment through trance and rebirth ceremonies. Between the sources of Biodanza there is the innovative method of “suspention trance” that allows to reach the trance condition in a progressive way and with a soft abandon.

6. The power of consciousness expansion

The consciousness expansion is a amplified perception condition and it is characterised by the original link with the Universe. Its subjective effect is an intense sensation of onto cosmologic unity and transcendent joy.

Biodanza induces consciousness expansion conditions through music, dances and meeting ceremonies. To accede to the “supreme experience” it is necessary to be prepared and a superior level of integration and maturity. The processes we use to induce progressive changes of consciousness condition are:

The Doctor Albert Hoffman (creator of LSD-25) proposed a new educative method based on the perception and capacity of empathy through the “entheogenic” experience, in a inner context with life. It is very difficult to realize this proposal because of the scientific ignorance; many authors frivolousness, e.g. Timothy Leary, lowered lysergic experience’s prestige, therefore mankind was deeply damaged.

In Biodanza we don’t use any drug and we prefer to activate neurotransmitter’s mechanisms which lay naturally in our body and induce a similar effect of entheogenic drugs. To live “the supreme experience” (closely accompanied and followed), bring us to discover e new sense of the life, to improve our connection with nature, with people and with ourselves. Transtasis (inner transformation’s immediate change) is the organic integration of perception, of abstract intelligence and affectivity.

Biodanza induces plenitude states and often ecstasies ones, trough exercises of affectivity and transcendence. The expanded consciousness experience has an enduring effect both to the sense of existence and to the way to be-in-the-world and they consist in a feeling of ecstasy in front of the creation, it’s woods, it’s animals and particularly in front of people.

The entheogenic experience is the “awakening of the divine in man” and has two main aspects:

7. The power of the group

The “group” in Biodanza is a rebirth matrix which integrates itself at an affective level, it constitutes a very intense interaction field. Biodanza is neither a solipsist system nor a verbal communication one. It’s power lies in the mutual induction of vivencias between the members of the group. The encounter situations have the power of changing in a deep way attitudes and human relationships forms. In Biodanza the integration form of the group is very different from traditional group dynamics.